Yes, a return to fiction is planned, actually it is underway right now, and Navajo Blood will be my next novel published in the upcoming future. In 2012 my daughter Marissa joined me for an extended visit to the Navajo Reservation, as we explored the land by ourselves and with a Navajo guide.

Navajo Blood has been polished for a number of years. But I have decided to add an additional 35,000 words to the manuscript to add more Navajo culture, character development, dialogue, and action to the story. This will change it from a genre novel to an historical novel.

Marissa with LK two years after her initial introduction to the Southwest and the Navajo Reservation, and almost three years before her first trip of actually walking the land of the Navajos and tracking them in search of reality during the darkest time in their history, the 1860s. Here, she is relaxing in the shade of Taos Pueblo, N. Mex. (image © Marissa and Louis Kraft 1989)

Navajo Blood will be the next LK novel published in the upcoming future. … In 2012 my daughter Marissa joined me for an extended visit to the Navajo Reservation, as we explored the land by ourselves and with a Navajo guide.This has been a project close to my heart for a long-long time. When she was young, Marissa had accompanied me on earlier exploratory trips onto the Rez. Background research, as always, is ongoing and will continue until the book is published. The leading players will be two fictional Diné, as the Navajos call themselves, an older warrior and his granddaughter, and a real frontiersman who had become a legend in the West, but who now wants to spend the remainder of his life with his family.

Navajo Fortress Rock is the centerpiece of the story. It is here that the three major characters will come face to face with each other and their future. It is here that the Navajo warrior, Pedro Hueros, will make a decision that will impact his life, his granddaughter’s life, and the life of the bilagáana, the white man, who devastated his people with little blood staining the ground.

“Pedro Hueros stepped slowly out of the hogan. An arrow nocked in his bow and ready. The coolness of night caressed Mother Earth. A breeze tugged on the bandanna he had tied around his head. There was a stillness that made everything one. This was the best part of day, this time between dark and first light.

“This was also the time of evil spirits.

Marissa w/Navajo Fortress Rock in the background on August 7, 2012. Fortress Rock is one of the major set pieces of Navajo Blood, for it is here that Pedro Hueros must make a decision that will impact his life. The view is from the west in early morning. The view of the Rock displayed in the header for this page is from the northeast.
If you don’t know how I write about the Indian wars—fiction or nonfiction—I must walk the land. I must feel the sun, the wind, … I must experience how hard it is to walk. (Photo © Marissa & Louis Kraft 2012)

“Streaks of orange sliced through a gray sky as Father Sun awoke. Pedro walked slowly, his eyes darting about—searching. Searching. There was a skinwalker, a wolf man, lurking out on the plain. It had awakened little Marguerita during the sleep hours when it leaped onto the hogan roof and dropped corpse powder down the smoke hole.

“Not a good omen.

“Pedro moved slowly, feeling the stiffness in his legs and the pull on his lower back. He didn’t like aging, but accepted it as a part of his time. His first priority now was sharing his knowledge with the young ones. Harmony among the Diné was all important.

“He had to kill the skinwalker before …

“Suddenly he heard the pounding of hooves, harsh yells, sporadic gunfire, shrieks of terror and pain. Pedro whipped around and ran, ran as fast as he could, stumbling, catching himself, running, … running. Out of breath, he paused bent over and gasping. Suddenly he jerked upright. Nothing! No sound at all, not even the rustle of the gentle breeze. The silence was deafening. Pedro sucked in air as an inward fear grabbed his innards and squeezed. He began to run … “

Kit Carson never entered Canyon del Muerto. He approached the center of the Navajos’ homeland from the south and confronted them from the west entrance to the three canyons. This image is looking east into Canyon de Chelly from the  Tseyi overlook on the south rim on August 8, 2012. (photo © Louis Kraft 2012)

Navajo Blood will deal with race relations, humanity, and tragedy in a land I love—northeastern Arizona and northern New Mexico. With everything I write, there is a back story. Will I tell it? Don’t know. Maybe. Anyway, I’ll post updates on this page as they happen (and alert you on the blogs).

Years back when I plotted Navajo Blood I knew that I wanted to write this novel, as it gave me the opportunity to explore Kit Carson—family man, patriot, warrior, but also a soldier who had a difficult task to complete that he didn’t want to do—and that was to wage war against the Navajos, who were his friends). The plot also gives me the freedom to explore the Navajo culture and lifeway and more, the tragical events that ultimately led to the end of their days of freedom. 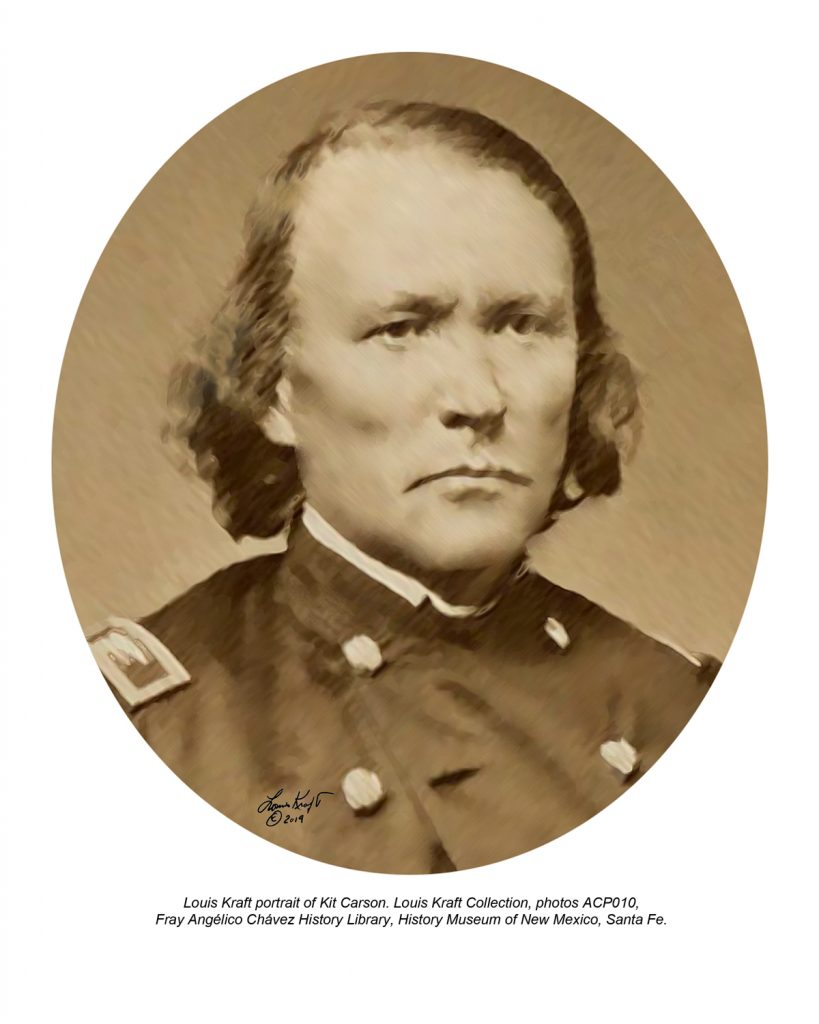 With the publication of Sand Creek and the Tragic End of a Lifeway (University of Oklahoma Press) now racing toward the stated March 12, 2020 date, that I would be confronted with the fact that I had zero nonfiction Indian wars books on my radar. How could this be? The Indian wars have been my freelance writing life (other than increasing move into the era of the golden age of cinema). I began to rethink Kit Carson. Could Navajo Blood become a nonfiction book? Yes! But it would be a different book as the two leading Navajo players were a warrior and his granddaughter. Could it be both fiction and nonfiction? It could be. Has this ever been done before by a writer? I don’t know. If no, this could be a marvelous challenge to a writer, and certainly one that could juice my creative mind. … If again no, is there another Kit Carson story that deals with race that grabs my interest? The answer is yes here (and I know the year range). To date the University Press of Oklahoma is lukewarm, at best, to me doing a nonfiction book on Carson. I don’t know why, for I think that it is a terrific project for me. … However, at the moment Errol & Olivia is my number 1 project. This said, the goal is to complete my archival research on Mr. Carson in the future. Will a nonfiction book on Carson be next after E&O. No, for Navajo Blood is next in line, and I will return to it while completing my research on Errol Flynn: The Defining Decade.

For the record I have a lot of Carson research already in-house.